The COVID pandemic has taken millions of lives, depressed economic activity around the world, and revealed deep structural inefficiencies, many of which are the result of efforts to create efficiency, based on incomplete thinking and a lack of commitment to wider wellbeing.

During the early days of the 2020 Presidential campaign in the United States, Pete Buttigieg—now Secretary of Transportation—said it was necessary to recognize that your cable company can make you less free. What he meant was: through unfair billing practices, by controlling access to information, through anti-competitive behavior, or by failing to deliver service when it is most needed, such powerful entities can restrict the personal sovereignty of individuals, families, and communities.

A stunning example of this played out in Texas a year later, when a late-winter deep Arctic freeze came over the state and its utilities failed to provide power and heat, leading to major disruptions, and tragic deaths. The ramifications of that tragedy continued to play out as people thousands of miles away saw energy bills spike, even as Texas utilities billed exorbitant sums in spite of dangerous system failures.

Left out of the equation is the humanity of the people left without heat, ill-served by an irrational market dynamic, and who then must fight powerful forces just to bring the quality of service up to baseline.

Such an imbalance of power makes everyone less free.

This year, the United States not only marks national independence on July 4. For the first time, the final liberation of the last enslaved people, on June 19, 1865, was honored as a national holiday. This pairing of holidays creates a “season of freedom” that naturally includes celebration as well as reflection, and hard conversations. And in those conversations about the rights of all people, we must remember it was not until August 1920 that women secured their right to vote in the United States.

The work of protecting everyone’s humanity from injustice is still ongoing.

George Floyd’s life ended, tragically, when he was murdered by someone sworn to protect him. The mass demonstrations that followed were the largest focused mass mobilization in US history. Suddenly, tens of millions of people who let story after story of structural injustice and brutality go by unnoticed, could not look away. If you thought this kind of crime was impossible, you likely enjoy the privilege of never having to worry about it.

Cultures both ancient and modern, of widely varied ideological bent, still find it difficult to put aside the idea that those with power and influence rule while the rest are compelled to submit to that rule. This is not only a question of democratic process and the protection of basic rights; it is also a question of economic structures and the levers of power they reinforce, and how that impacts the everyday personal sovereignty of individuals, families, and communities.

Are we not ready, finally, for a world in which the humanity in each of us is what our economic and political structures most prize and protect?

If we are, then we need to make sure the process of recovering from COVID is one that reinvents prosperity to ensure all people can access the four essential human freedoms Franklin Delano Roosevelt laid out in his 1941 State of the Union Address: freedom of speech, cultural and religious freedom, and also freedom from want, and freedom from fear.

To be free from fear means not only the right to be confident one will not face unaccountable violence by agents of the state or by rogue actors; it also means freedom from the existential crisis of chronic endemic poverty, acute hunger, pandemic disease, and climate breakdown.

If we are to fully live the freedom we celebrate, we need to:

An effective project for co-creating a better human future should also be guided by the 17 Sustainable Development Goals, which equate to the realization of dignity, sovereignty, and reciprocal responsibility, for all people.

Because our Principles for Reinventing Prosperity and our understanding of macrocritical resilience lead us to the insights laid out above, Resilience Intel is announcing an Economic Freedoms Program—to examine the ways in which structural economic forces expand or constrain the personal rights, sovereignty, and wellbeing of individuals, and the sustainability of the natural and human systems that make thriving possible.

Over the coming months, we will report on the progress of this inquiry, and in 2022, we will issue the first Resilience Intel Economic Freedoms Report (EFR). The EFR will be a resource for better understanding how economic incentives line up with:

The first EFR, in 2022, will be a progress report on the process of COVID recovery and climate transition, in line with the Principles for Reinventing Prosperity. 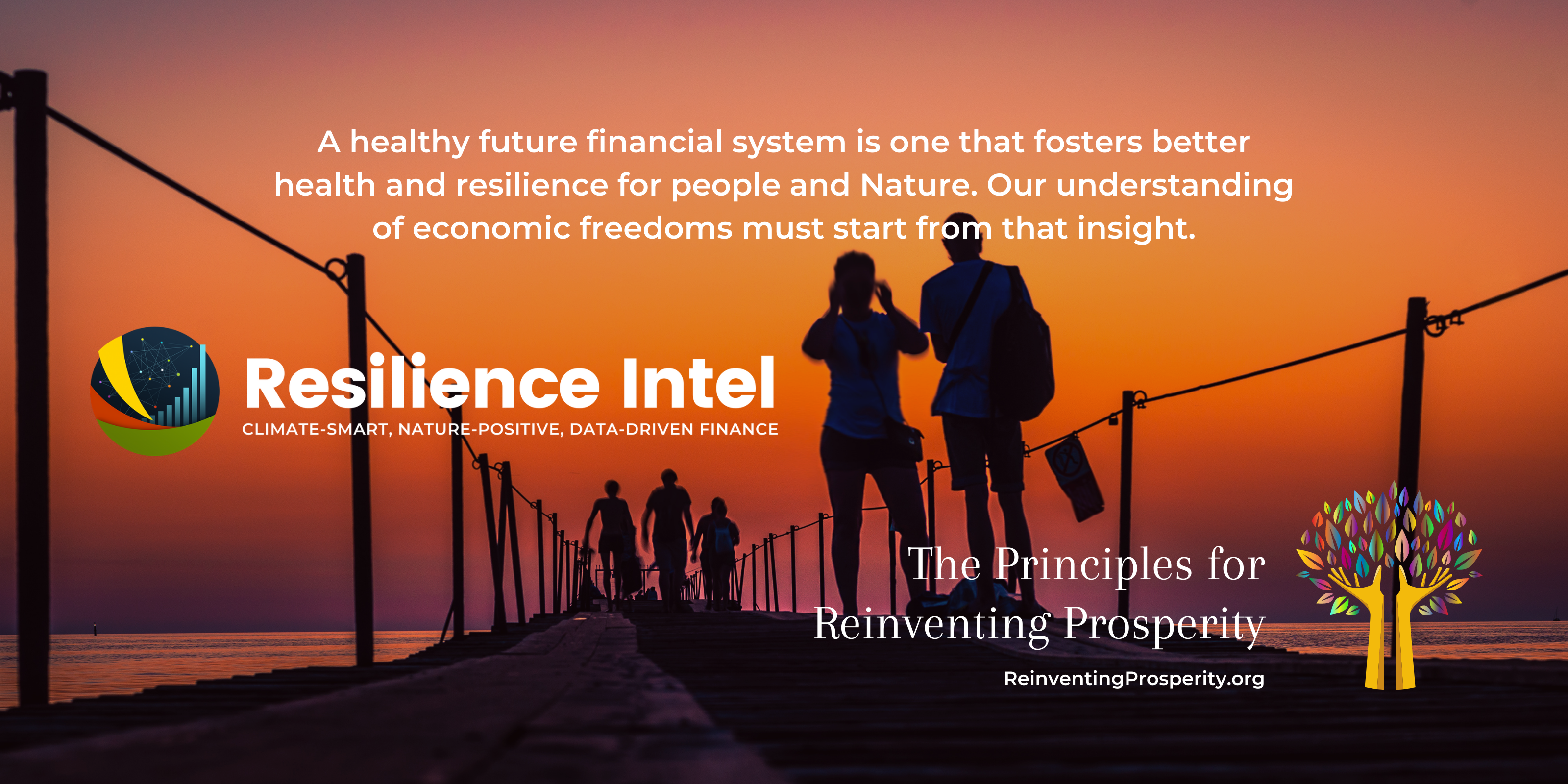