On Monday, March 2, the Proceedings of the National Academy of Sciences published a study titled “Climate change in the Fertile Crescent and implications of the recent Syrian drought“. The study links the onset of the Syrian civil war to the severe and pervasive impacts of a prolonged drought in the region, the worst known from the instrumental record. The abstract of the study reads:

Before the Syrian uprising that began in 2011, the greater Fertile Crescent experienced the most severe drought in the instrumental record. For Syria, a country marked by poor governance and unsustainable agricultural and environmental policies, the drought had a catalytic effect, contributing to political unrest. We show that the recent decrease in Syrian precipitation is a combination of natural variability and a long-term drying trend, and the unusual severity of the observed drought is here shown to be highly unlikely without this trend. Precipitation changes in Syria are linked to rising mean sea-level pressure in the Eastern Mediterranean, which also shows a long-term trend. There has been also a long-term warming trend in the Eastern Mediterranean, adding to the drawdown of soil moisture. No natural cause is apparent for these trends, whereas the observed drying and warming are consistent with model studies of the response to increases in greenhouse gases. Furthermore, model studies show an increasingly drier and hotter future mean climate for the Eastern Mediterranean. Analyses of observations and model simulations indicate that a drought of the severity and duration of the recent Syrian drought, which is implicated in the current conflict, has become more than twice as likely as a consequence of human interference in the climate system.

This echoes the report given by one of the Free Syrian Army’s commander’s in the documentary Years of Living Dangerously, last year. He explained to reporters that he had been a farmer, but over the years it became more and more difficult, and then impossible, to make a living and even achieve basic sustenance. His local perspective was that “this is a war of hunger”, citing drought, water shortages, and incompetent government response to the crisis, as reasons for the ferocity of the uprising.

The featured image behind the headline of this article shows already severe drought conditions in Syria, as early as 2003. The 2007-2010 drought was much more severe, leaving many rural communities with no way to make a living or achieve sustenance, and pushing refugees into cities where food was already at a premium. The following is an image of the Khabur, Syria’s main tributary flowing into the Euphrates, nearly dry in October 2009: 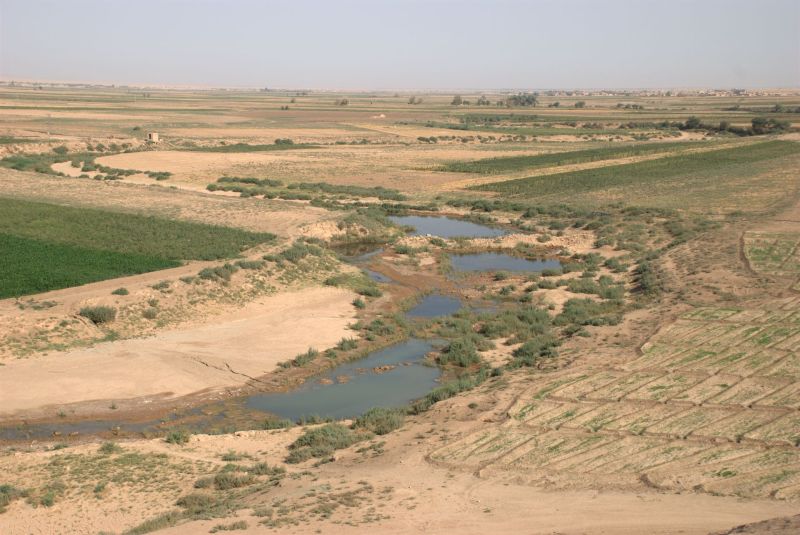 Water and food resource impacts are a leading cause of political destabilization, in any period. Climate impacts are making both water and food insecurity far more probable and far more frequent. Strategic security specialists are examining the emerging, and worsening, climate security threat matrix, and security and economic analysts are beginning to see climate change mitigation strategies as central to building a resilient, secure future.

The US military’s Quadrennial Defense Review describes climate change as a “threat multiplier“, a finding which this new study about the emergency of the Syrian conflict supports. At a Climate Change and National Security Roundtable, hosted by Citizens’ Climate Lobby and the San Leon Texas chapter of the American Legion, in Washington, DC, Brigadier General Gerald Galloway called climate change a “catalyst for destabilization“, affecting human populations around the world.

For more news about the connections between climate impacts and security risk, check in with our Peace and Security section from time to time.